Dr Proctor got as close to living on Mars as anyone can today. She served on a Mars-simulation mission as an analogue astronaut, and her special mission included food.

Food is vital for survival of course, but also provides pleasure and comfort. Even a mission that returns the astronauts to Earth will be long, sometimes terrifying, and sometimes tedious. What cup of tea would you want to curl up with at the end of the day? What flavors would you want to mash into your evening potato? What herbs would you grow in the settlement’s gardens?

Sometimes the lovely embedded video gets lost – if you don’t see it above, this is the You Tube link: https://www.youtube.com/watch?v=4_Fvc3vSa0s&feature=youtu.be

Cooking for Mars is a fascinating topic. Test out some recipes from my scifi Mars colony here. 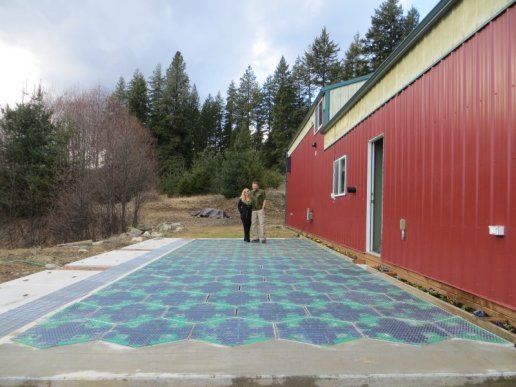 One of the negatives of solar power stations is the land they chew up. Acres of desert will be shaded and access roads between panels will be compacted and denuded of vegetation, creating problems with water run-off and habitat destruction. But America already has thousands of acres of hard, compacted surface with easy access for maintenance: roads. What if roads were paved with solar cells? Roads go everywhere; could they replace expensive and vulnerable electrical distribution systems? If power were generated everywhere, would we be safe from outages due to storms or terrorism? Would roadways heat themselves and eliminate the need for snow plows and salt? It all sounds like science fiction, and yet…

Solar Roadways claims they have a technology that works and that they’re ready to start production. You can contribute through crowdsourcing.

Nothing is free: the panels must be manufactured, installed, and maintained; they must survive the constant pounding of traffic; the power must to be tied to the existing grid. As I look at the pot holes and crumbling shoulders of many roads, I wonder if our roads are even a suitable base for panels.

But it’s way too interesting to ignore. People once said the streets in America were paved in gold. It would be even more valuable if they were paved in power.

PS: I’ve read that George Takei, of Star Trek TOS, has tweeted favorably about solar roads. But if you’re curious about the likely problems, Jason Torchinsky has assembled a formidable list, from cost to hackers to durability, and he didn’t even mention dirt obscuring the embedded panels. He favors roof-top installations, including structures built over parking lots. I believe there are solar panels built alongside roads in Germany, on the right-of-way the state already owns. Even if I never drive on a solar road, I expect the effort will teach us something about generating solar power.